When Should You Start Preparing for the ISEE Test

Students prepare for the ISEE private school admissions test year-round; however, assuming a January or February test date and application deadline, about a quarter of students will start preparing in summer; half—the majority—will start in fall, and the remainder will play catch-up in winter.

But you should start preparing for the ISEE private school admissions test right now. At least start with a 20-minute mini-diagnostic test to see where your child stands.

Okay so now you’re probably thinking, “Close the window. This guy is quack; he doesn’t even know when I am reading this article so his ‘recommendation’ makes no sense at all.”

Except dear reader, I know all that I need to know–you went to the Google or maybe even the Bing and started searching for information about this “I-S-E-E” test you’ve been hearing about.

Now the degree of “preparation” does admittedly take on different meanings depending on when your child plans to take the ISEE. The chart below shows the approximate number of unique visitors to Piqosity’s ISEE-related webpages over a one year period. 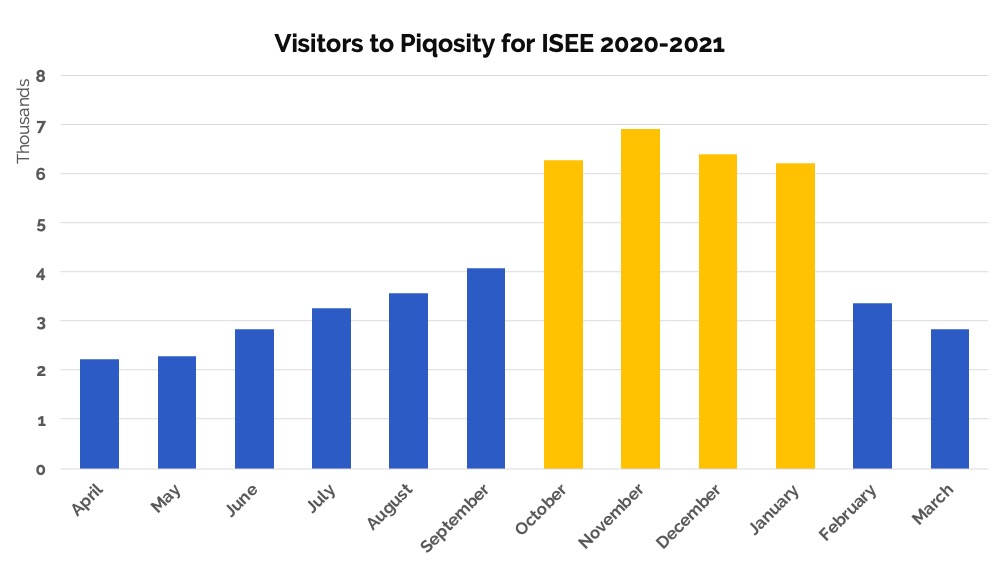 Should vs Actually Start Preparing for the ISEE

There are three key-takeaways from this chart:

To be fair, the students who wait to the last minute generally fall into two camps:

So why the sudden sense of “right now” urgency? There are three primary reasons for this blanket recommendation based off the online stats above and my 18 years of tutoring experience:

1. That you’re researching the ISEE right now shows that you’re aware of the test and want your child to be prepared.

At your child’s earliest convenience, give them a mock ISEE test to gauge where they currently are. It doesn’t even have to be a full-length test, you can use one of Piqosity’s free 20-minute mini-diagnostics. The results of that mock test will immediately let you start planning how much—or how little—your child will need to prepare.

2. Preparing for any standardized test from the ISEE to the ACT to the GRE is more about mastering core academics than anything else.

Acing standardized tests like the ISEE requires that your child know how to read and work with decimals. There are no amount of tips, tricks, or strategies that will make up for a deficiency in basic academic skills. If your child needs to remediate some skills, that will require time, especially if they are relatively weak in reading.

3. In the linear game of life, it’s always better to have enough time rather than insufficient time.

You and your child will feel a lot better knowing you have plenty of time to prepare rather than stressing out about what could’ve been had you started earlier. And cramming for standardized tests doesn’t work; the ISEE is not going to ask about Columbus sailing the ocean blue in 1492. You cannot cram the ability to manipulate fractions or identify the main idea of a paragraph.

When should I take the ISEE? 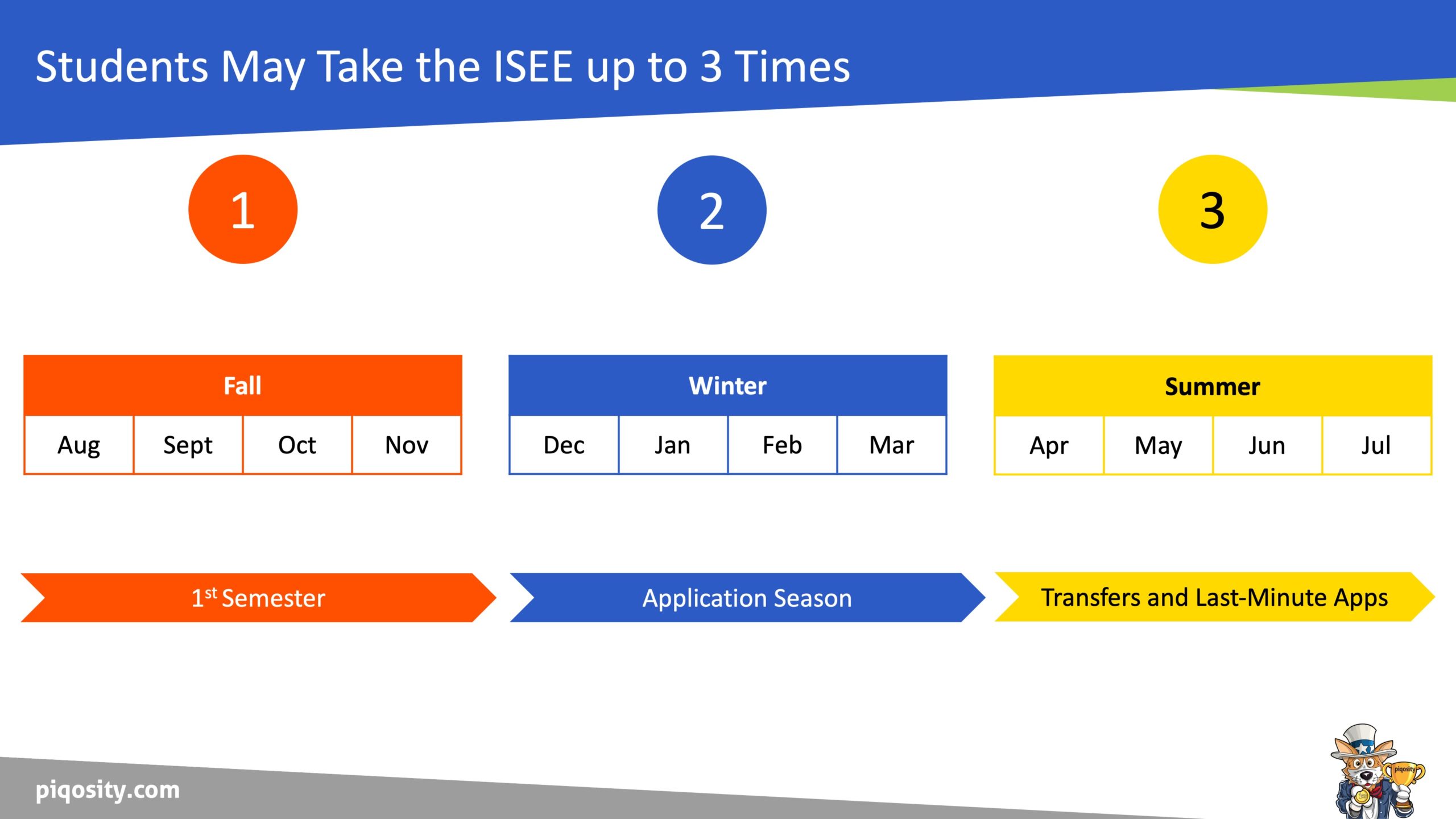 Students can take the ISEE up to three times a year, but most schools reviewing in-cycle applications will only accept scores from the two testing periods between August and March. These testing periods are:

Students can only take the ISEE once in each of the prescribed periods above. For example, your child could not take the ISEE both in January and February, since both months fall during the second testing period.

The exact date when your child will take the ISEE will depend on what is offered by the local private schools in your area as there are no “national test dates” like there are with the ACT or SAT. In Houston where Piqosity is based, most students will take the ISEE first in November and again in January. You’ll register to take the test directly with the administrator ERB, and it will probably cost you about $175.

If your child has the time, they should absolutely plan to take the ISEE twice. Taking a standardized test like the ISEE, ACT or SAT more than once is the only scientifically proven way that students consistently improve their scores.

Note that “when to take the ISEE” is very different from “when to start preparing for the ISEE.” By the time your student actually takes the ISEE, they would ideally be well-prepared and encounter absolutely no surprises on test day. In fact, using apps like Piqosity to do practice and take full-length mock tests, they should even already know what score they’re going to get.

How do I prepare for the ISEE?

Preparing for the ISEE is as simple as knowing where you want to be, knowing where you currently are, and taking the steps necessary to bridge the gap. A more specific break down along with a time estimate for an average student follows:

As you can see from the steps above, the average student probably spends around 30-50 hours on preparing for the ISEE. Spread out over six months, that means this student is doing as much as eight hours a month or just 2-hours a week of preparation.

To some parents this may sound like a lot of test prep. But as you can see in the break down, most of this time is spent simply on ensuring your student is comfortable with the tested skills in math and reading. Therefore, think of preparing for the ISEE less as “test prep” and more as “ensuring my student is on level in core academic subjects with their peers.”

For the purpose of the steps outlined above, an average student is an A/B student in school who scores a 4 or 5 (50th percentile) on their diagnostic practice test and wants to improve that score to a 7 or 8 (90th percentile) and plans to apply to moderately competitive private schools in a major metropolitan area.

Learn more about how to tutor the ISEE as a parent or educator.

Learn more about how to prepare for the ISEE Upper, Middle, or Lower Levels with our comprehensive prep guides.

What is a Good Score on the ISEE? 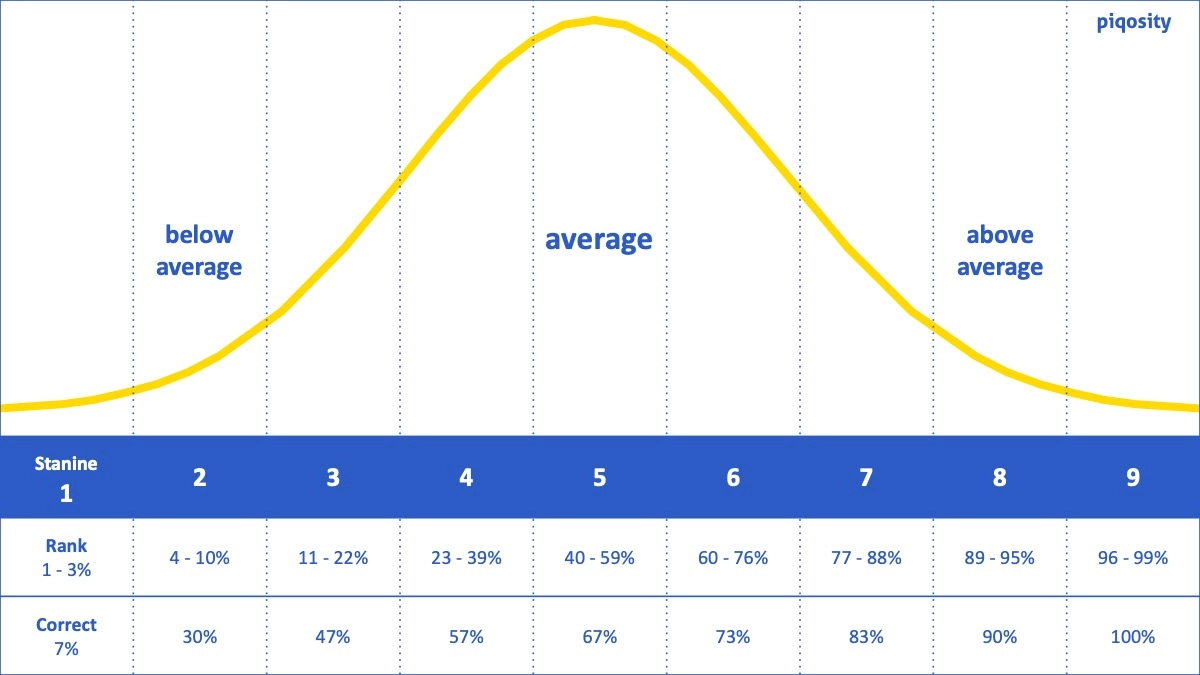 The ISEE is a peer-normed test, which means that students receive a score relative to their peers. In the case of the ISEE, peer is defined as students applying to the same grade from the last 3 years; students in your child’s class are therefore not in the peer group since they are in the current year.

In general, a good ISEE score is a Stanine Score of 7, 8, or 9. Stanine Scores of 4, 5, and 6 are considered average, and scores of 1, 2, and 3 are below average. However, the comprehensive answer to “what is a good score” ultimately depends on several factors, including the schools to which you are applying.

Learn more about what represents a good ISEE score.

The Easiest and Smartest Way to Prepare for the ISEE

As the founder of said company, I am clearly biased, but I think the smartest and easiest way to start preparing for the ISEE is to sign up for Piqosity. At least take the free, mini-diagnostic ISEE practice test. It’s entirely up to you whether or not you want to pay the low fee to keep preparing with our 10 full-length ISEE practice tests, content review lessons, and explainer videos.

Depending on your comfort level with the relevant math and English level, you could even be your child’s tutor (see Piqosity’s guide here). Or you can hire a qualified third party tutor (check out Piqosity’s educator leaderboard for suggestions).