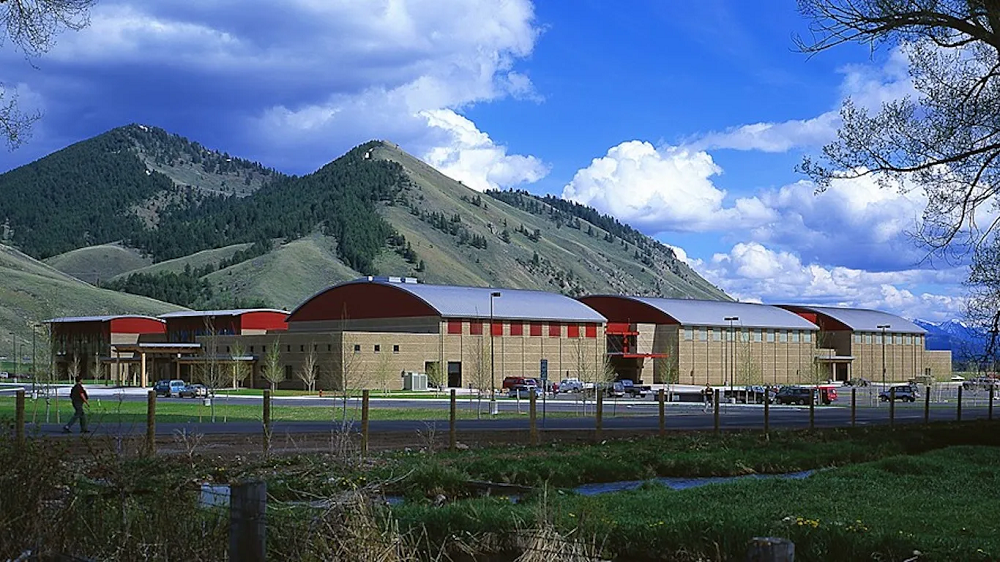 Jackson Hole High School was previously named the top Wyoming high school; based on its most recent ACT results, students there can continue to hold their heads high! (Spoiler alert: their average scores were top in the state.) A high school’s average ACT scores can reveal a lot—they are usually a reliable indicator of college- and career-readiness, and the best high schools are those which adequately prepare their students for college or a career. This article examines general trends in Wyoming’s 2020 ACT scores with a focus on the top-scoring high schools across the state.

For over a decade, Wyoming has administered the ACT to all high school juniors; consequently, the state’s data gives a remarkably full picture of its students’ aptitude and progress. In 2020, Wyoming was one of 15 states where an estimated 100% of graduates took the ACT; among these, it had the fourth highest average scores. Among states with 100% testing rates, Utah scored highest (20.2) and Nevada had the lowest average score (17.9).

Context: The Effect of Population Size

In general, states with higher testing levels tend to have lower average scores. One main reason for this is that they include results from students whose future plans may not include college-level coursework. In states where standardized testing like the ACT is optional, test-takers are primarily a self-selecting, academically advanced cohort, which is reflected in their test scores.

Wyoming has the smallest population of any American state; correspondingly, its senior class sizes tend to be small, too. What this means from a testing perspective is that each individual score has a greater impact on the state’s (or a school’s) average. The chart below depicts Wyoming’s average score distribution. If just one more student had been added to each group scoring above a 19.0, Wyoming’s average score would have risen from a 19.7 to a 19.8. 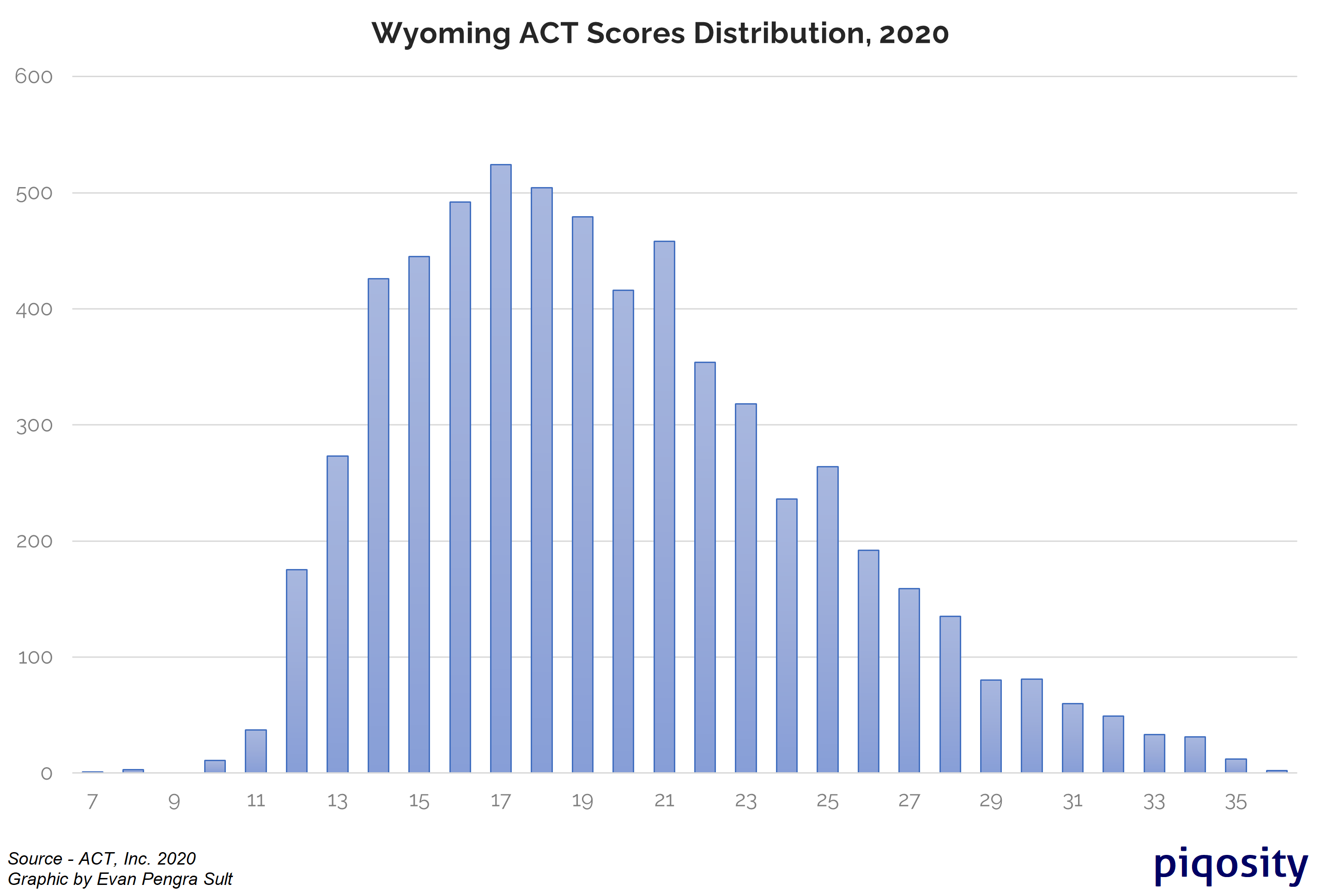 As we’ve noted, not all students plan to pursue post-secondary education, but in a state like Wyoming, they will still have to take the ACT. It’s not hard to imagine, then, that in some cases, these students may “take” the test but not actually complete it, resulting in an artificially low score. In a state with a higher population like neighboring Nebraska, these outliers will have a much smaller effect than they do in Wyoming.

Many Wyoming Juniors Are Not College-Ready

When comparing Wyoming to the national average for students meeting ACT College Readiness Benchmarks (CRBs), it’s clear that the Class of 2020 lags behind in all areas. Wyoming graduates are most college-ready in English, with just over half (52%) of graduates meeting the CRB. But the numbers are lower in other subject areas, with 38% meeting the Reading benchmark, and just under one-third showing college readiness in Math (31%) and Science (29%).

But as discussed above, Wyoming’s small population makes improving these rates a much more attainable goal. Let’s put it in terms of concrete numbers: imagine Wyoming wanted to match its rates of college readiness to the national average in all categories (a good goal to start with). To accomplish this it would need to improve the English and Math scores of 375 students and the Reading and Science scores of 438 students.

Not only would Wyoming not need to improve that many students’ scores, they wouldn’t need to increase them by all that much. For instance, in 2020, 442 Wyoming students were within 1 point of meeting the Science CRB—raising the scores of that cohort alone would close the gap between Wyoming and the national average. (The numbers are similar for other subjects.)

Nationally, there is a concerning correlation between a student’s racial background and their likelihood of ACT success. In general, Asian Americans have the highest rates of success, followed by white students. Students who identify as Black or African American score the lowest (Hispanic students, and students of other races, generally score somewhere in the middle.) It is important to emphasize that this is not a causative relationship. Black students do not score worse than white students, on average, because they are Black; rather, it is that many factors which negatively impact ACT scores tend to disproportionately affect non-white (and non-Asian) students.

Wyoming’s Class of 2020 is overwhelmingly white (72%); the second-largest group—Hispanic students—makes up only 14%. So while it is technically accurate to identify a racial achievement gap between, say, white and Black students in Wyoming, it’s important to keep in mind that there were fewer than 50 Black students tested in 2020. (Here again, an outlier score will have an outsized impact.)

In addition to race, a student’s economic status is often closely related to their ACT performance. Nationwide, the achievement gap between students whose family income is less than $36,000 a year (classified as “low income”) and those whose family income exceeds that amount is very wide: when comparing students who meet 3 or more CRBs, over 20 percentage points separate the two groups.

In Wyoming, this gap is nearly half the size—around 12 percentage points. Again, we’re looking at a fairly small number of people; in 2020, fewer than 1,000 students were classified as “low income.”

Wyoming’s Colleges are Attainable and Affordable

A slim majority (53%) of 2020 Wyoming graduates aspire to a minimum of a four-year bachelor’s degree. This number is probably not a wholly true representation of seniors’ college plans, since about 34% of students declined to indicate their post-secondary educational plans. (If we consider the proportion of college-bound students as a portion of those who actually responded, the figure is 80%. The “real” answer is probably somewhere in the middle.)

If these college-bound seniors are anything like their peers in previous years, about half of them are planning to remain close to home. 2019 Seniors, for instance, sent an 47% of their ACT score reports to in-state colleges; their top five selections were:

High ACT scores make any student an attractive candidate: at the University of Wyoming, applicants qualify for “assured admission” if they meet the following criteria:

(For reference, about 36% of 2020 graduates comfortably cleared this ACT bar.)

High ACT scores can also be a boon to students looking for additional financial aid. At Sheridan College, for instance, applicants who scored at least a 25.0 on the ACT are eligible for the High Academic Achievement Scholarship, which can be used for 4 consecutive semesters to cover in-state tuition & fees. (About 12% of 2020 seniors would qualify for this award.)

Regardless of where students end up, Wyoming colleges are well within the financial reach of many students. For instance, all of the five schools listed above rank within the Top 8 Most Affordable Colleges in Wyoming—the in-state tuition of all five is under $4,000.

The following table presents data from 73 Wyoming high schools for which full data was available. (Note: Schools which tested fewer than 10 students are not included.) The scores presented here are from then-11th graders who took the ACT in 2019, most of whom then graduated as part of the Class of 2020. Two schools tied for 2nd place, and four schools tied for 5th place. See subject scores breakdown for further delineation.